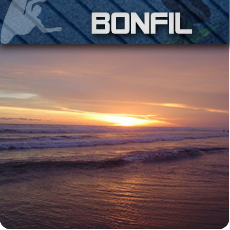 Located just five minutes from the Juan N. Alvarez International Airport, Playa Bonfil is considered to be one of the best and most consistent waves in Acapulco. Getting to this little paradise is easy, just take the Boulevard De Las Naciones and take a right onto Boulevard Barra Vieja. After passing the beach club “El Cano”, Playa Bonfil begins and will immediately take you back to the Acapulco from thirty years ago. Like the other beaches around, the season for waves in Bonfil lasts all year.

The difference being that all levels of surfers can surf here, from beginners to so-called pros. The season for the biggest waves runs between April and September and Bonfil is known for having better swells and, unlike other beaches around where the waves are more closed-out, here the waves are bigger, better situated, and hold a decent shape when there isn’t a strong current. During the months of smaller waves between October and March, Playa Bonfil is the perfect place to come surf and spend some great moments in the company of friends. The waves in Bonfil are peaks that break both to the left and to the right over a sandy bottom. This beach preserves its depth the best, making it the ideal place to receive swells. Here, you can find cheap hotels and there also happens to be a turtle camp on the beach that permits camping along the shore for a small fee.

There are also restaurants, where you can eat the famous pescado a la talla, horseback rides, spectacular sunsets, as well as the best vibes in and out of the water. We’re sure that once you get to know this place, it’ll soon become your favorite spot.