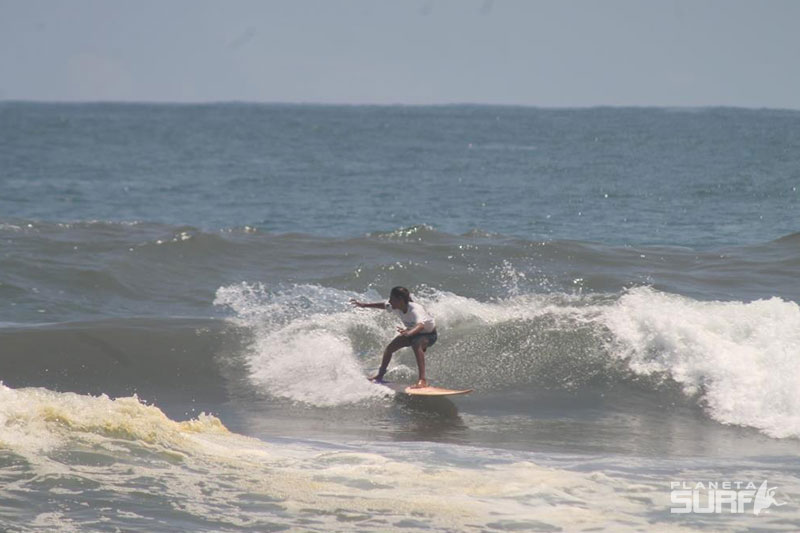 Surfing has grown considerably in recent years and there are more and more children and young people starting to practice it. Many do it for sport, for fashion, or for the lifestyle, but then there are some that practice surfing as a vocation, for competition, for a challenge, for passion and for the love of the sea. Such is the case with Kristal Hernandez Bello, a dark-haired, petite girl with great skills and talent in this extreme sport. Originally from Zihuatanejo, Guerrero, Kristal is an ocean girl with a great story that has motivated many. She’s the state champion, has been the national champion twice, and has also represented Mexico in world surfing championships. Today, Kristal shares part of her story with the readers of Planeta Surf. 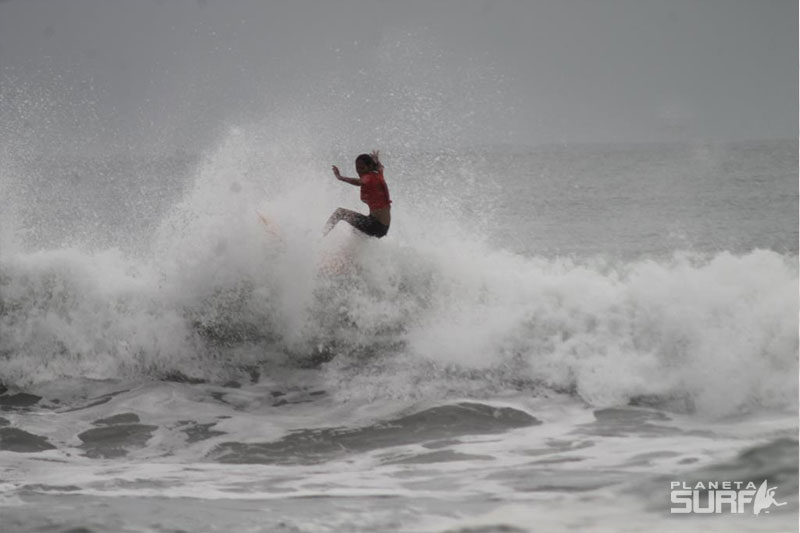 My family has always been close to the ocean. Since I can remember, I’ve grown up around the beach. My grandparents worked in the ocean and my father is a fisherman, so I learned to love the ocean. I have a few uncles that are surfers and, one day, I got to watch them surf the waves with their boards and I became fascinated. Since then, at the age of thirteen, I wanted to learn how to surf. My mother’s name is Maria de Lourdes Bello Flores and my father is named Juan Manuel Hernandez Magaña. My sister’s name is Nelcy Saray and I have a 6-month-old daughter named Kelly Brigette Palacios Hernandez with my partner, Carlos Palacios Sanchez, who practices BMX. 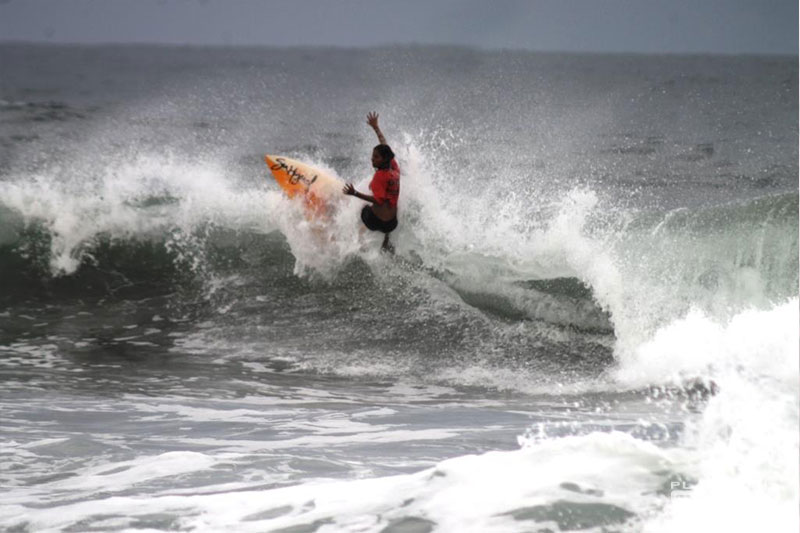 The day I got my first board was very special for me. I really wanted to learn how to surf and had told my dad but he refused because he knew or had seen surfers do some wrong things and it had created a bad image of surfing in his mind. So, I begged my mom and said that I wanted to learn how to surf and, one day, a few days before my Birthday, my mom told me that she wanted to give me something... After my Birthday, she gave me my first board and I cried from excitement because it was the best gift ever. I couldn’t believe it! I fell asleep that night hugging my board and had all kinds of dreams that night—a few of them have even come true. The next day, I took my board to Playa la Madera and from there, learned how to surf. 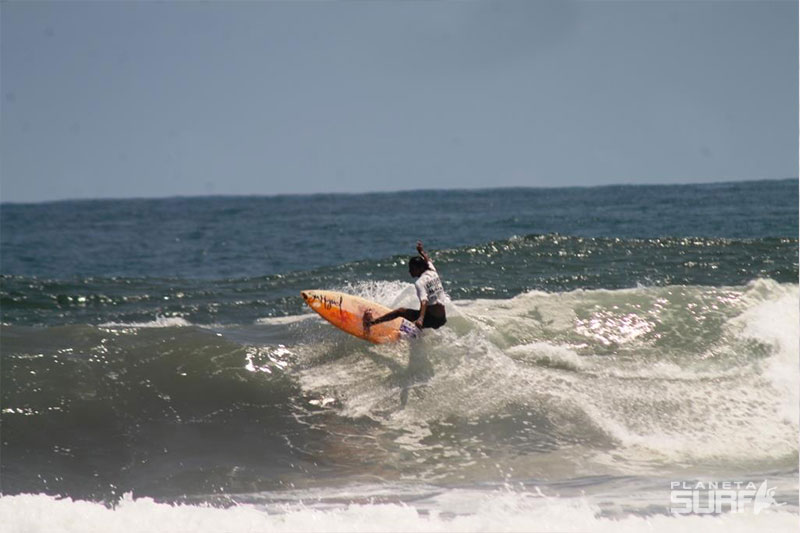 I learned how to surf with a group of friends. I think everyone learned like that and I also watched a lot of videos and put them in slow motion to see how the surfers surfed. I asked those that did tricks for advice and they more or less told me how to do them.

THE CHALLENGE OF COMPETITION

You know, those who already knew how to surf gave me a hard time, and more so for being a woman, I imagine. They said I wasn’t going to learn and always tried to compete with me in the water, stealing waves. After that, I started trying harder and since there were more guys than girls in the water, I competed against them and sometimes even won. 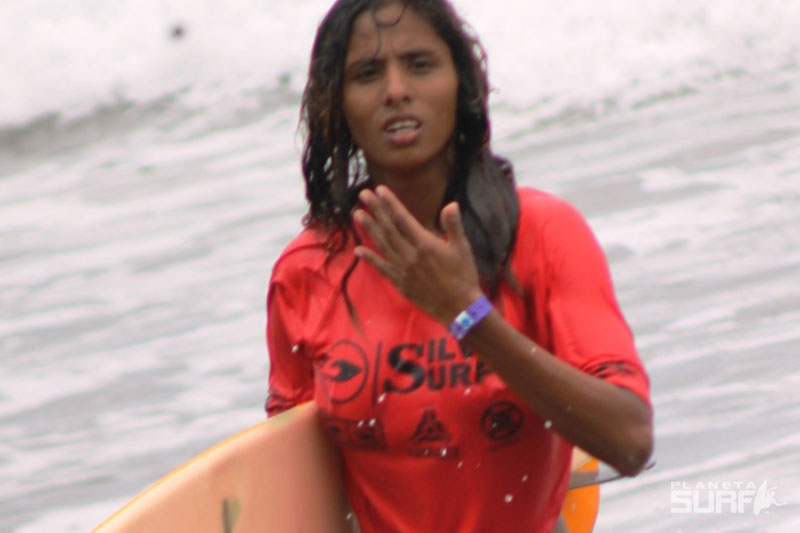 Kristal is a local from Playa Majahua and, in addition to enjoying different beaches in Zihuatanejo, has surfed the waves of Acapulco, Puerto Escondido and Huatulco, Oaxaca, San Miguel, Ensenada, Baja California, Michoacan, Mazatlan and Peru.

MY EXPERIENCE IN ZICATELA

I’ve surfed waves in various beaches around Zihuatanejo and when I went to Puerto Escondido for the first time, I went straight to Playa Zicatela to see its big and powerful waves. I saw it as a challenge, since, from where I’m from, the waves aren’t as big. As soon as I began paddling out, my fear became my dream and I said, “If I can overcome my fears, I will achieve my dreams.” I liked it because, even though I had never surfed something like Zicatela, I managed to do it. 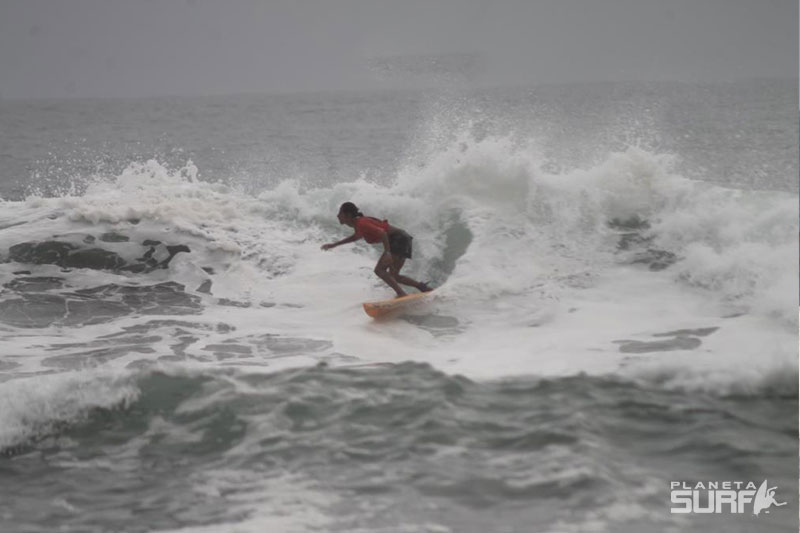 I like cutbacks, tubes, aerials, and especially the vertical and radical hits.

SURFING IS MY SPORT

I usually try to surf three times a week and, if there’s time, every day. Sometimes I stay all day and only get out to eat. 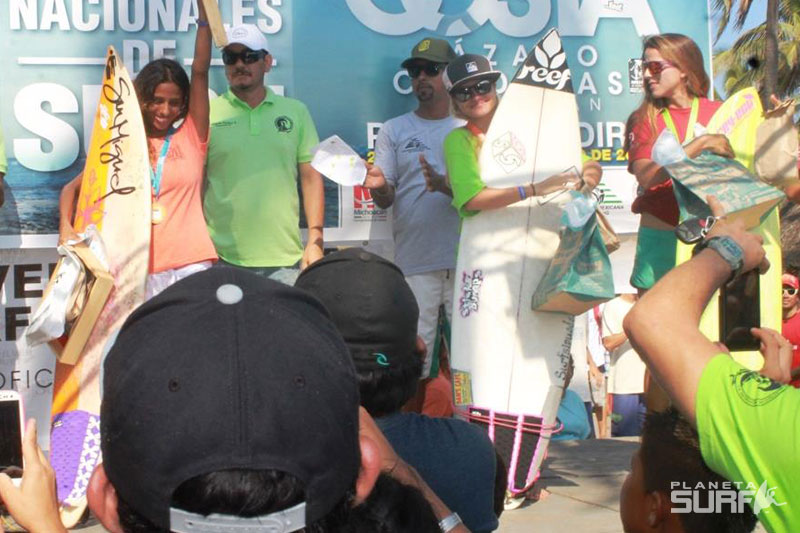 I’m the current national champion in the open category that I won in Lazaro Cardenas, Michoacan in 2014. I really liked this year’s National Games because I hadn’t really surfed in over a year and still challenged myself to compete and, luckily, won the national championship.

My first contest outside of Mexico was in Peru during the Quiksilver ISA World Junior Surfing Championship in 2011, in Punta Hermosa. I really enjoyed representing my country and did it with a lot of pride and enthusiasm. Even though it was my first world contest, I was the last competitor on my team to get eliminated in the third round of the playoffs. Mexico ended up placing 17 out of 27 countries. 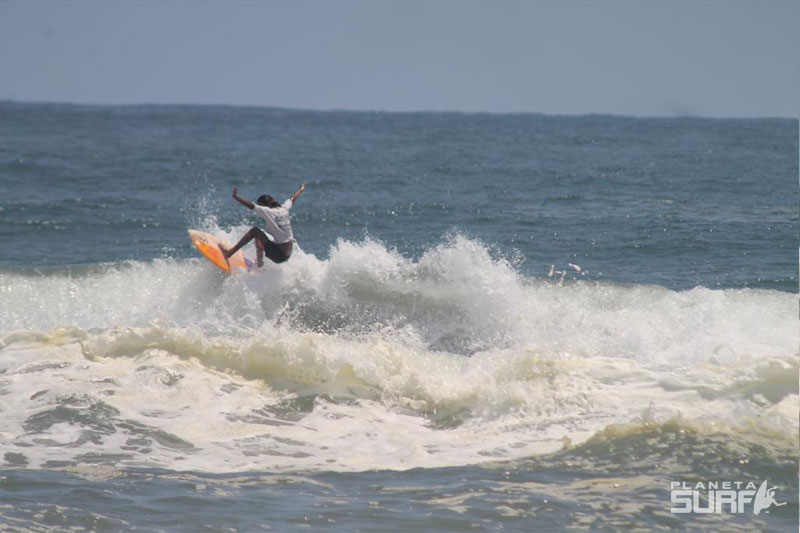 My mom is my inspiration, my pride, and my role model and has cheered my on and given me the best example of fighting for what you want. She is a sign painter, knows how to do many things and nobody has ever taught her. She has the capacity to face or be on par with an educated painter because, even though she hasn’t gone to school or anything, she knows a lot.

In surfing, I admire Kelly Slater and Carissa Moore. 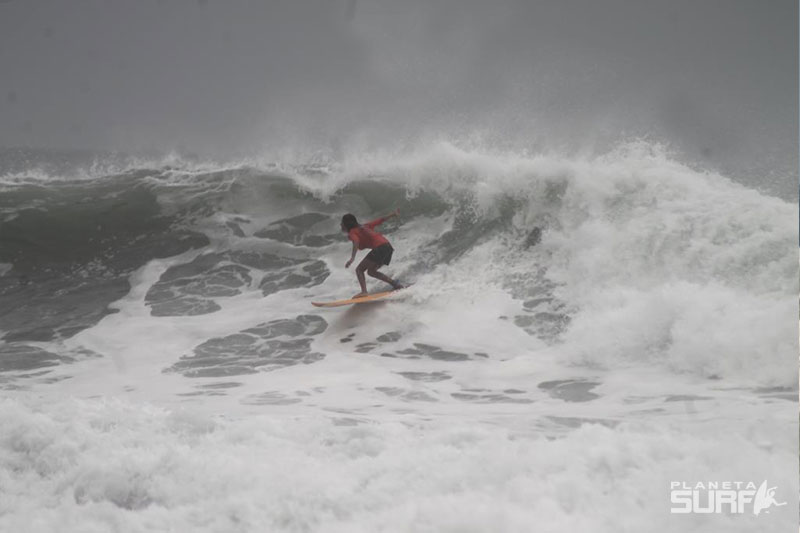 My dream is to be among the best surfers in the world. Also, to travel and surf different waves around the world, have a surf shop and school where kids or people that want to surf can come and find support so they can get motivated and develop as a surfer. 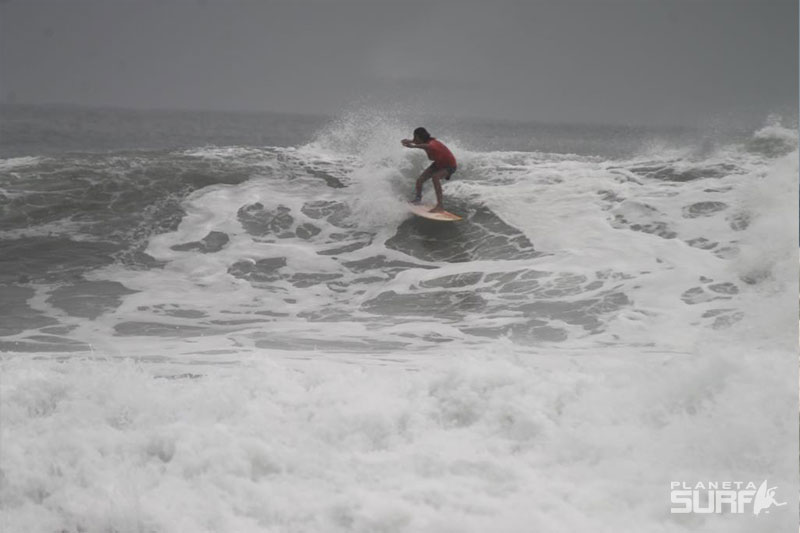 One day, I went to Las Gatas to surf. It was pretty bad weather and they had closed the port for the boats. I really like to surf there and there were really big waves that day. I had a great time surfing but the trouble was, I didn’t ask my dad for permission and he came looking for me with his belt and I got in trouble. [Laughs]

Pargos Bikinis and Orozco Surfboards, who are going to send my two boards, sponsor me. 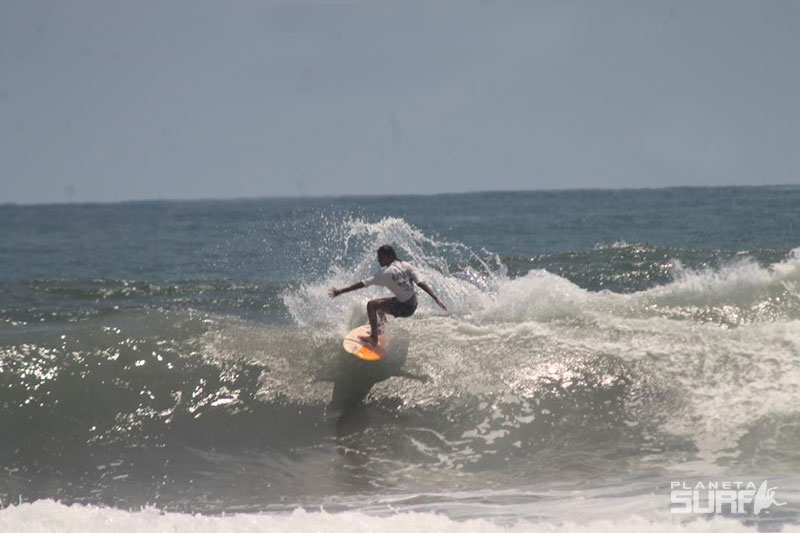